Not long ago, we looked at how an increase in subwoofer voice coil temperature reduced the power delivered from your amplifier. With component temperatures easily exceeding the boiling point of water, the impedance of the voice coil can increase by more than 50%. Manufacturers that understand this go to great lengths to include technologies to help keep things cool so you can enjoy your music.

What Is a Subwoofer Voice Coil?

The voice coil is a winding of wire in the center of a subwoofer, speaker or tweeter. This winding is connected to the speaker’s terminals. When current from a radio or amplifier flows through the winding, it creates a magnetic field. The magnetic field opposes or is attracted to that of the stationary magnet in the speaker. This force moves the cone or diaphragm (that’s also attached to the voice coil former and winding) forward or rearward.

The audio signal from an amplifier or radio is an alternating current signal. This means that the voltage changes polarity, which causes the speaker or subwoofer cone to move forward and rearward. The speed at which the signal changes direction determines the frequency, and the amplitude of the signal determines cone excursion.

A 2-ohm subwoofer rated for 500 watts of power may see as much as 15.8 amps of current flowing through the voice coil. Given the horrible efficiency of all moving-coil speakers, more than 490 of those 500 watts are converted to heat instead of sound. As such, the voice coil will get extremely hot.

As the voice coil gets hotter, its resistance increases and the current flowing through it from the amplifier decreases. This increased resistance results in less power being dissipated in the speaker, and the output level decreases. In short, the louder you play a speaker, the less efficient it becomes. This phenomenon is called power compression.

Keeping the voice coil as cool as possible is not only crucial to the performance of speakers but also to its longevity. The adhesives used to keep the voice coil wound together have an average maximum temperature limit of around 220 degrees Celsius. After that, the materials boil and the winding unravels, usually resulting in the assembly jamming in the magnetic gap. At this point, the driver is typically headed to the garbage bin.

Manufacturers use many cooling designs to help extract heat from the voice coil. Let’s look at a number of them.

One of the easiest ways to increase the thermal capacity of a subwoofer is to design it with a large voice coil winding. Quite simply, the added mass and surface area allow it to absorb and consequently dissipate heat more quickly. Think of this like boiling water on a stove. It might only take a minute to boil a cup of water in a saucepan, but it might take 10 minutes to bring a commercial stock pot of water to a boil.

Over the years, several speakers have been designed with multiple stacks of compact magnets rather than one or two large ceramic units. The space between the magnets allows hot air to escape from the outside of the voice coil.

The area of the basket to which the spider is attached is called the spider mounting plateau. Including vents in the basket below this lip allows hot air to escape from the top edge of the voice coil. It can also help improve the subwoofer’s linearity by preventing the air in this space from compressing or rarefying at high excursion levels.

Another way to allow air to flow around the voice coil and motor assembly is to add vents to the voice coil former itself. These vents can work similarly to spider plateau vents to help pressurized air from under the spider or the dust cap escape.

The point at the base of a subwoofer cone where the spider and voice coil are attached is often referred to as the triple-joint. This is not only an area of significant stress, but it can get very hot. JL Audio created its Vented Reinforcement Collar (VRC) to reinforce this connection and allow air to flow between the components to improve longevity.

Allowing air to flow around the magnet assembly is crucial to helping manage temperatures in a subwoofer. Where many drivers add rubber boots to provide a clean and tidy appearance, those devices can insulate the magnets and reduce their cooling efficiency. Leaving the magnets as open as possible to the air in the enclosure helps them stay cooler longer.

Some subwoofers feature vents in the underside of the cone beneath the dust cap. These vents relieve pressure and allow hot air to escape. Some companies use a composite component to attach the cone to the voice coil and include vents in that design.

Subwoofers like the ARC Audio SW Series have their motor assembly mounted to the front of the cone. These compact designs use high-temperature neodymium magnets instead of large ceramic magnets to maintain magnetic field strength in a small package. Having the motor on the outside of the woofer allows heat to dissipate efficiently. The type of enclosure that your subwoofers are installed into can significantly affect their ability to handle power. In an acoustic suspension (sealed) enclosure, the air inside is heated by the speaker and has no way to escape. This same logic applies to enclosures that use passive radiators. We’ve seen instances where wiring has been scorched, and stickers on the back of the subwoofer have fallen off.

A single-tuned bass-reflex enclosure provides the ability for the air to be exchanged with the outside air. This helps keep the subwoofer cooler. If you’re having a bandpass enclosure constructed, ask that the motor assembly be installed on the side with the vent. This will increase power handling and reduce power compression.

If you are a bass head or compete in car audio SPL competitions, keeping your subwoofers as cool as possible is a good idea. It might not be insane for a competitor who has to compete in many rounds to run ducts from the climate control system to the motor assembly and allow the air conditioning to cool things off.

For those of you who play music loudly for long periods of time, drop by your local specialty mobile enhancement retailer today and ask them about subwoofers with cooling features that can handle the performance levels you have in mind.

It’s time to dispel another unsubstantiated car audio myth! This time, we’re talking about claiming that you can’t … END_OF_DOCUMENT_TOKEN_TO_BE_REPLACED 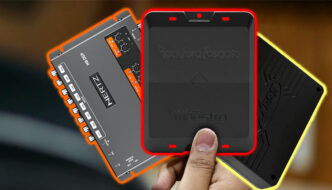 Every professional audio system installation, be it for a church, dance club, home theater or your car, requires DSP … END_OF_DOCUMENT_TOKEN_TO_BE_REPLACED